Study visit to the Board of Estonian Police and Border Guards within the project „Enhancing capacity of services to combat drug trafficking at the European level” co-financed co-financed within the programme the Internal Security Fund - Police.

On 9th-12th of June, 2019 there was held the study visit to the Board of Estonian Police and Border Guards concerning the project „Enhancing capacity of services to combat drug trafficking at the European level” financed from the European’s Union’s Internal Security Fund-Police.

The purpose of the study visit was to  get to know the technical capacity of the Estonian Police and Border Guards  in combating drug-related crime and  to exchange knowledge and experience in this domain.

During the study visit  the representatives of the  Regional Police Headquarters in Lublin, Nadbużański Border Guard Unit, the National Police Headquarters-  Polish Police Central Bureau of Investigation, National Police General Directorate in Bulgaria, the Berlin Police, National Spanish Police, General Inspectorate of Romanian Police and Satu Mare County Police Inspectorate  got acquainted with the legal regulations on drugs use/trafficking and  state strategies concerning anti-drug policy in Estonia. They also were  presented the structure and functions of the Drug Sector in relation to prevention and fight against drug-related crime, technical capacity and the main problems the unit encounters. It turn out that Estonia is not a significant consumer on the drug market but it is only of a transit nature country. In the Estonian market, the majority of drugs are sold on the Internet, so-called "Dark Net", where both dealers and consumers remain anonymous. Particular attention was paid to the criminal division, due to its leading role in the area of ​​preventing and combating drug crime, as well as the Border Guards as a link ensuring security at the external border of the European Union. The Estonian Police Criminal Division (the Office for Combating Organized Crime) works closely with the Customs Service of Estonia in this respect. The project partners  visited the road border crossing in Narva (Estonian-Russian border) where they were presented the work of the dogs which detect drug smuggling. They also got acquainted with  the equipment used for radiometric control  which is  operated by the Estonian Customs Service. Special focus was laid on the mobile X-ray scanner which  scans the entire vehicle and allows for a significant elimination of smuggling in passenger car construction boxes.

Thanks to the visit, the participants could exchange information in relation to their daily activities concerning combating drug trafficking and establish working contacts which may be fruitful in their work. 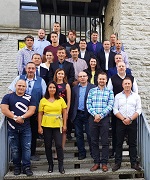