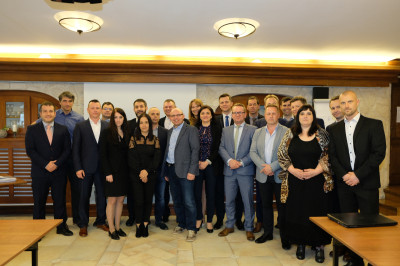 On 5th-8th of May, 2019 in Kazimierz dolny over Vistula river, there was held the meeting of the Project Team Management concerning the project” „Enhancing capacity of services to combat drug trafficking at the European level” financed from the European’s Union’s Internal Security Fund-Police. In the meeting  the representatives of the Regional Police Headquarters in Lublin, Nadbużański Border Guard Unit, the National Police HeadQuarters -  Polish Police Central Bureau of Investigation, Estonian Police and Border Guard, National Police General Directorate in Bulgaria, National Spanish Police, the Berlin Police, Satu Mare County Police Inspectorate, General Inspectorate of the Romanian Police participated. During the meeting there were discussed  in detail the objectives of the project: activities, results, reporting to the European Commission, financial settlements with partners and the European Commission, principles of communication and cooperation during the project implementation. The partners were familiarized with the dates of the project activities and they were acquainted with the preliminary programmes of the study visits and programmes of the workshops, and for their part they gave information about the units they represent, including tasks related to fighting drug-related crime. The study visits and the workshops are planned as follows: